To share your memory on the wall of Martin \"Marty\" Robinson, sign in using one of the following options:

Print
Martin F. Robinson, formerly of Hampton Bays, NY, passed away on March 17, 2021 at his beloved cabin in Jay, NY at the age of 68, with his wife and beloved dogs at his side.

Marty was born on October 11, 1952 in the Bronx and grew up in Hopewell Junction, NY, where he graduated from John Jay High School. He spent most of his adult working life in the restaurant business that he adored. After stints in Florida and Texas, where he ran a restaurant for Willie Nelson, Marty returned to New York and worked for many years at the Star Boggs Restaurant on Dune Road in Westhampton Beach. There he was known as the Lobster Man, who would brag about the thousands of lobsters he cooked for the Monday Night Lobster Bakes.

It was at this restaurant where he met his wife Patti, who worked side by side with him at his lobster bakes and catering jobs. Marty and Patti married on August 2, 2003 on the beach in Sag Harbor, NY. For five years they owned the Before the Bridge Restaurant in Hampton Bays, NY.

Marty went back to college to earn his Bachelors of Arts degree in Human Services from St. Joseph’s College in Patchogue, NY. He loved his time working with seniors with Alzheimer’s and dementia for both the Town of Southampton and at the Hamptons Center for Rehabilitation.

But anyone who knew Marty best, could tell you that, aside from his wife, his real passion in life was for the New York Jets. He lived and breathed for each football season and always said he bled green. His continuing dream was to live long enough to see the Jets win another Super Bowl; the Jets always let him down.

A celebration of Marty’s life will be held in the future, most likely during football season.

There are no events scheduled. You can still show your support by sending flowers directly to the family, or planting a memorial tree in memory of Martin "Marty" Robinson.
Plant a Tree

We encourage you to share your most beloved memories of Martin "Marty" Robinson here, so that the family and other loved ones can always see it. You can upload cherished photographs, or share your favorite stories, and can even comment on those shared by others.

Posted Mar 18, 2021 at 11:30am
Remembering you and Marty in our thoughts and prayers. He was a wonderful man, and will be greatly missed.

3 trees were planted in the memory of Martin "Marty" Robinson

Posted Mar 19, 2021 at 04:44pm
How will I ever watch another Jets vs Patriots game and not cry? I will miss Marty's banter and wit during those games, with Patti and I breaking the "no texting during football" rule. I will miss his smile and gentle giant manner. I suppose I will always think of him when I hear a bottle of champagne open, remembering back when he used to love it in the evening. I am certain that I will never pass another St. Patrick's Day without thinking of the gallant Irishman and I will be sure to throw back a pint in his honor. Patti, you are surrounded by loving friends. We are here for you in your loss. May you find peace and solace in wonderful memories of him and the strength he left you in your shared, undying and forever love. ~ Linda, your Marymount Sister
Comment Share
Share via:
LD

Posted Mar 19, 2021 at 03:46pm
We are so sorry to hear about your loss of Marty he was a wonderful man. Marty had a heart of gold we will definitely miss him in the store talking to him he was always trying to help everyone out may God bless him and you if there is ever anything that we can do please don’t hesitate love David and Linda from Tops market❤️
Comment Share
Share via:
CC

Posted Mar 17, 2021 at 06:15pm
Let your memory grow and live to inspire many Marty. Let your branches reach to the heavens, and bring shade and protection to all in need. Peace. 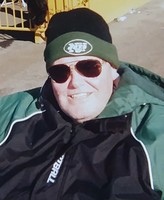