To share your memory on the wall of Esther Dorr, sign in using one of the following options:

Preceding her in death was her husband Russell D. Dorr; her ... Read More
On February 27th, 2021,Esther Ann (Nolan) Dorr passed away at CVPH Medical Center. She was born August 26, 1945 to John and Esther (Nelson) Nolan of Au Sable Forks, New York.

Esther was a beloved mother, a devoted wife and treasured friend. Esther loved to dance, sing, baking, raising hell, feed the birds and play bingo. She will forever be in our hearts.

Services will follow at the convenience of the family.

To send flowers to the family or plant a tree in memory of Esther Dorr (Nolan), please visit our Heartfelt Sympathies Store.

Receive notifications about information and event scheduling for Esther

We encourage you to share your most beloved memories of Esther here, so that the family and other loved ones can always see it. You can upload cherished photographs, or share your favorite stories, and can even comment on those shared by others.

Posted Mar 03, 2021 at 06:32pm
Thoughts and Prayers to all of Esther's Family. May she rest in peace and not have any more suffering.
Comment Share
Share via: 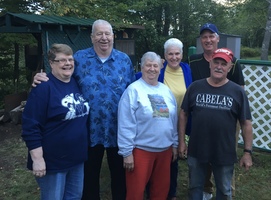